See why talent thrives in Ireland, so your business can too

An enduring location for investment

Resilient and flexible infrastructure to support your business

Tap into a source of storytellers, makers and creators in media, digital, gaming and more

Avail of high quality IT, superb infrastructure and talent to serve major markets

Your guide for dedicated professional services in Ireland

Your partner on your investment journey

Here to Help You

Supporting your investment in Ireland

A range of property solutions to fit your business needs

Qualtrics Chooses Ireland for its Skills Base

One word sums up why Qualtrics chose Ireland for its first European office. “Skills are the sole reason we went to Ireland,” says cofounder Jared Smith. “Ultimately, what you want is a geography where you can build an office that has broad market coverage. For a company going into Europe, Ireland has the lowest cost to set up a business, with a broad pool of talent from across the EU.” Capture consolidated roles for faster ramp-up Smith advises fast-growth companies expanding to Europe to identify all functions that work best when consolidated and locate them in Ireland. It’s more cost-effective to build, for example, a multilingual accounting team in Ireland than hiring an accounts receivable person in each country. “The same is true for support, finance, engineering, customer success or inside sales: you can staff all of these functions easily within Ireland. For many of these roles, you start driving up cost if you put them anywhere else but Ireland,” says Smith. “If we were to land on the ground tomorrow for the first time, the IDA would set us up to meet with five different law firms, employment agencies and real estate brokerages. It’s very straightforward to get a company established in Ireland and start hiring,” adds Smith. Ireland’s existing ecosystem of technology companies benefits all companies that locate there. “You have lots of people starting their career, and you have tech companies training and developing those people which gives you the ability to recruit. It cross-pollinates best practices; that ecosystem is a huge upside, particularly at the management level. If you’re setting up a finance team there, you’ve got 10, 15, or 20 candidates to choose from,” Smith says. Companies coming to Europe for the first time need to be aware of how the language difference will affect their hiring plans. “The staffing model is heavier than if you were staffing a support team for customers in the US,” says Smith. Assimilation model To build up its European site, Qualtrics chose an assimilation model that combines in-country hiring with landing teams. “Our landing team was five people, which was very light, and we immediately hired the local manager and then they built the team together.” Smith aims as much as possible to hire from within the Irish market rather than attracting hires to relocate from other countries. He also doesn’t believe in having ex-pats lead international operations for extended periods. Watch what you measure US companies should be wary of judging their international offices by the same standards that HQ now measures itself by. “It always takes a little longer; it’s not one of those things that you can take a shortcut on. There’s some point where you take the training wheels off and you let them crash a bit. It was bumpy, but when we first built the business, it was bumpy too. The right thing to ask is, how did we perform when we were a 50-person company, not a 900-person team? Don’t have the performance benchmarks of a much larger team. It’s very similar to launching a new product where it doesn’t become a blockbuster overnight,” Smith advises. Cost, cluster, coaching It’s essential to take the time to find the right site leader for a European headquarters – especially where many top tech companies compete for talent. “An inspirational leader is very important in a company that’s young and is hitting up against a bigger competitor. Ireland gives you an advantage in finding that because of the ecosystem.” Qualtrics engaged two different headhunting agencies and evaluated 20 different candidates. “If you’re building a team from scratch, it’s really important to have the player-coach as your leader and we looked until we found them.” 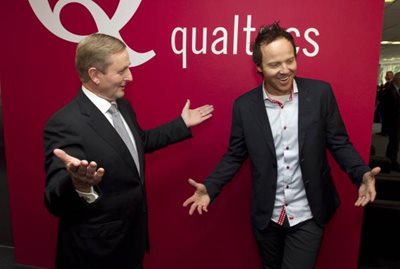 Ultimately, what you want is a geography where you can build an office that has broad market coverage. For a company going into Europe, Ireland has the lowest cost to set up a business, with a broad pool of talent from across the EU